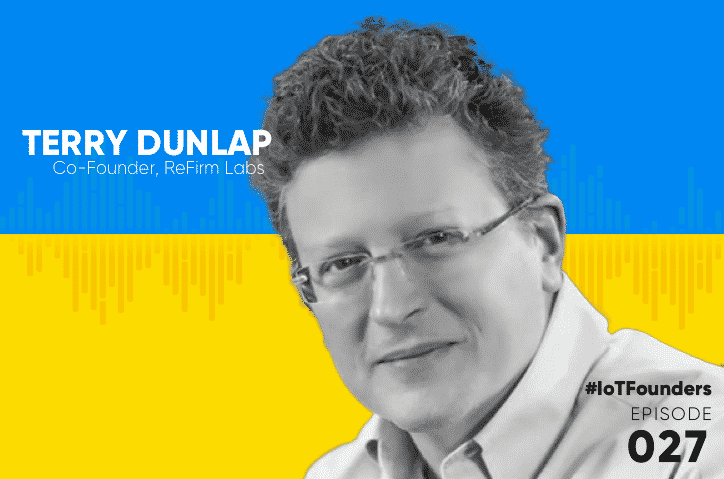 On this IoT For All podcast episode, former NSA analyst Terry Dunlap introduces us to the problem of IoT device firmware vulnerabilities and how to handle them. He also shares his compelling journey from a teen hacker to an operative tracking down terrorists. He shares with us how that path led to co-founding ReFirm Labs.

Terry Dunlap, Co-founder and Chief Evangelist Officer of ReFirm Labs tells us the story of how his arrest as a young man led to a career in offensive cybersecurity at the NSA, where he hunted down terrorists. We discuss how ReFirm Labs was born from these experiences and how they expose and handle domestic and foreign cyber threats lurking inside the firmware of connected devices.

We wrap up the episode with various use cases that detail the security vulnerabilities that exist at the firmware layer of IoT devices and why manufacturers are to blame for many of the issues that occur. Finally, Terry provides advice on how consumers can better protect themselves when buying IoT products.

If you’re interested in connecting with Terry, you can find him on LinkedIn!

ReFirm Labs is an emerging leader in the risk mitigation space. With decades of experience securing devices for sensitive national security applications, our team has developed new methods for you to evaluate and monitor risks lurking inside the firmware of IoT and connected devices.

What do Smart Cities Look...

Podcast IoT For All - January 23, 2020
Micha Boneliel, CEO and Co-Founder Nodle.io, discusses what Nodle does, how their crowdsourced connectivity network was created, and the challenges/risks associated with deploying this type of network.

What Are LoRa and LoRaWAN? | Wienke Giezeman, CEO & Co-Founder of The Things...

Podcast IoT For All - January 16, 2020
On this IoT For All podcast episode, Wienke Giezeman, CEO and Co-Founder of The Things Network, discusses what LoRa and LoRaWAN are, the role they play in the IoT connectivity space and how they are fueling the growth and adoption of IoT.

Podcast IoT For All - December 19, 2019
On this IoT For All podcast episode, Noelani McGadden, VP of Strategic Accounts at Senet, discusses the role Senet plays in the IoT industry, how Senet launched the largest public LoRaWAN network, and how their network is influencing adoption across the Internet of Things space.

What Does the Store of the Future Look Like? | Trevor Sumner, CEO of...

Podcast IoT For All - December 11, 2019
On this IoT For All podcast episode, Trevor Sumner, CEO of Perch, discusses how Perch is changing the physical retail industry, what the store of the future looks like and how retail jobs will be affected by new technology.

Podcast IoT For All - December 4, 2019
On this IoT For All podcast episode, Rohit Tripathi, SVP and Head of Products at SAP Digital Interconnect, discusses what the next generation of IoT services/solutions will look like, the impact of IoT in 2019 and his predictions for 2020.

What Is the ‘First Mile’ of IoT and Why Is It Important?| Bill Dykas,...

Podcast IoT For All - November 22, 2019
On this IoT For All podcast episode, Bill Dykas, Product Manager at Telit, discusses what a Product Manager does at an IoT company, the role Telit plays in the IoT space, and what the 'First Mile' of IoT is and why so many companies overlook it.

Podcast E043 | Why Solutions Are the Key to IoT Adoption | Albert Behr,...

Podcast IoT For All - November 14, 2019
On this IoT For All podcast episode, Albert Behr, CEO of BehrTech, discusses the challenges faced when building a solution into a legacy system, how important partnerships are to the IoT industry, and why solutions are the key to IoT adoption.

Podcast IoT For All - October 30, 2019
Lisa Elenius Taylor, Head of Portfolio Marketing at Ericsson, discusses how to effectively market an IoT platform, how marketing in the IoT space differs from marketing in other industries and what types of content have been the most successful when marketing IoT platforms and solutions.

Podcast IoT For All - October 17, 2019
On this IoT For All podcast episode, Vasileios Nasis, CEO & Founder of Netronix Inc, explains common roadblocks in IoT adoption, the current state of the market, and what we should be on the lookout for in the coming months.