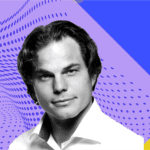 In episode 11 of the Let’s Connect! Podcast, Erik Fossum Færevaag, Founder and President of Disruptive Technologies, joins host Ken Briodagh to talk about Smart Buildings and Facilities Management. In particular, they look at how the commercial real estate industry needs to evolve with the help of IoT solutions.

Erik Fossum Færevaag is the Founder and President of Disruptive Technologies, a Norwegian Tech company providing The World’s Smallest Wireless Sensor. The company has received numerous recognized awards such as Gartner Cool Vendor, Nordic Startup Awards, Norwegian Tech Awards and more. The sensor is the size of a postage stamp with 15 years battery lifetime, unmatched ease-of-use and scalability. Sensor data is delivered on a cloud API, where the complete service, including sensors, are managed. Erik’s background is from the microchip/semiconductor industry, architecting the world’s lowest power microcontroller EFR32 and the world’s lowest energy ISM band digital radios.

Interested in connecting with Erik? Reach out on Linkedin!

The commercial real estate industry needs to evolve with the help of IoT solutions. Click To Tweet

Disruptive Technologies is a developer of commercial-grade wireless sensors and a rapidly growing innovator in the IoT market. The Internet of Things promised a self-sufficient world of interconnectedness, but the technology was expensive, cumbersome and limited. It also came with a range of new privacy and security concerns, hindering adoption. The company’s sensing solution simplifies data collection and delivers the data securely to their dashboard (DT Studio) or a partners’​ analytics programs in the cloud. The technology enables sensor solutions for smart buildings, facilities management, workplace, manufacturing & warehousing, cold storage and substations. Finally, safe, cost efficient and sustainable operations allow people to truly unload the ordinary for more rewarding pursuits.  Follow them on Twitter.

5:40 What is Building Cleaning Validation?

6:43 The Future of Work and Workspaces