Listen to the audio version of this article!

Hurricane Harvey hit southeast Texas this past weekend, bringing 30+ inches of rain and devastating flood waters. This is the worst hurricane to hit the U.S. in ten years and the extent of the damage is still unknown, with tens of thousands of Texan residents displaced. While the storm itself was bad, Houston’s approach to urban planning only made it worse. In a three part series in December 2016, Pro Publica outlined how the city’s infrastructure wouldn’t hold up to a flood.

There were some technological advancements that played critical roles in relief during and after Harvey. Social media supported and expanded civilian rescue efforts. Open data became instrumental in providing residents with up to date information about flood levels and shelter locations. In the aftermath, the city of Houston and private companies like AT&T are employing IoT technology to identify damage and provide aid and information.

At the height of the storm, open data provided locals with accurate and up-to-date information. Residents could identify rising water levels through an interface created by Sketch City, which tracked the county flood gauges. The gauges were installed throughout the city’s bayou system, which was created to collect and drain water.

The “depression era design” of the bayou was no match for the rain levels of this 500-year flood, and the gauges became the critical source of water level measurements informing residents on which evacuation routes were still usable. 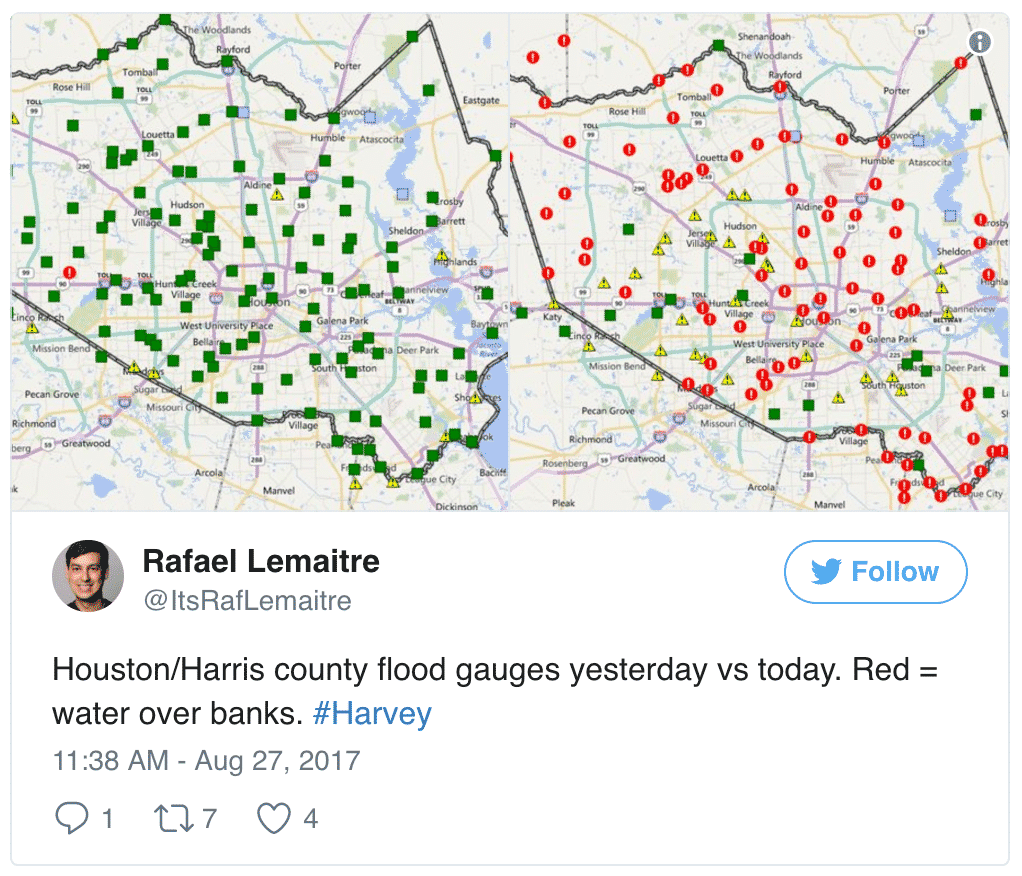 As the flooding progressed, open data was used to list Red Cross shelters and evacuation routes that were still passable. A group of volunteer civic technologists, SketchCity, quickly created “a suite of tools to address community needs for rescue, relief, and recovery.” On HarveyNeeds.org, you can find information about food banks, shelters, evacuation assistance, government updates, grocery stores, donations, and more.

“The situation at shelters is changing rapidly. It took 12 hours before we had all the clothing we could handle. The application Sketch City built is helping coordinate information with shelters in real time.” Steven David, Houston Mayor’s Office of Innovation and Performance

The collaboration between the government, shelters, food banks, and the developers of SketchCity brought to life a tool that immediately identified needs around the city and connected residents to trustworthy information.

In 2016, the Federal Aviation Administration approved drone technology for commercial use. The effort in Houston is likely to be the first wide scale use of drones to measure damage since.

The FAA authorized oil and energy companies to send drones to “their facilities, power lines and other parts of the local power grid,” according to Axios.

AT&T sent out 25 drones to inspect their cell towers for damage. These drones provide a more detailed view of the area and are a safer option than sending a cell tower maintenance team to the site during a disaster. The drones will report back with HD video and photos, giving the company a “bird’s eye view of the tower,” according to AT&T.

Farmer’s Insurance is using its drone fleet for the first time. The company had already received more than 14,000 claims from Harvey in the 5 days of the storm and immediate aftermath. The fleet will be measuring damage filed in the claims, capturing “high resolution, 3-D images capable of detecting granule loss and physical damage,” said Tim Murray, Inside & National Property Claims for Farmer’s Insurance.

Allstate will be flying “hundreds of missions each day” which is likely to be the widest-scale use of the technology to date, according to mySA. Allstate announced earlier this year that it would primarily be using drones for property damage inspections moving forward.

As more and more drones take off, it’s important to note how effective they are during rescue missions in floods. Over 53% of life-saving drone rescue missions have been in areas with rising floodwaters. DroneDeploy is planning to publicly share data collected by drones in the areas affected by Harvey so that the community can zoom in and locate anyone in need of aid or rescue. Drones can also deliver supplies like life jackets or rope to those in need.

As of right now, there is no “Amateur Emergency Drone Service” in the case of a natural disaster, where commercial pilots would be able to volunteer their services and technology to help. Moving forward, this may be something the FAA moves to establish. The FAA has already issued 40,000 drone pilot licenses, and estimates that that number could grow 10 times in the next 5 years. A service through which these pilots could volunteer whenever disaster strikes could be life-saving.

As cities become smarter, natural disasters will become more predictable. By monitoring big data and forecasting future events, cities will be able to significantly counteract the impact of natural disasters through heeding early warning signs and planning evacuations. One way Houston monitored their flood levels was through the county flood gauges, but their system was not adequately prepared for Harvey.

One example of an early warning system is the network in use at Popocateptl, the most active Volcano in North America. If Popocateptl did erupt, it would affect local Mexican villages near the Volcano. In an effort to prevent this disaster, the Mexican government has set up a data collection network that gives the villages early warnings of any spike in seismic activity.

California has built an early warning system that tests for a range of hazards, including seismic sensors and other trackers that build on the existing networks of GPS stations. The system will cost $10 million dollars and was approved last year. It will take up to two years to implement the entire system, with a limited roll out in the early stages. Features include slowing down train lines as soon as the warning is triggered, and future plans involve incorporating it into school classrooms.

An early warning system is the central element in IoT response platforms used during natural disasters and their aftermath. With IoT technology based on open data and drones, cities are now more prepared than ever to manage disaster when it strikes. But nothing is as effective in preventing harm as an accurate early warning system and infrastructure that can withstand the weather.

Digitizing a Thing’s Lifecycle, Part I: Life Beyond Maintenance

The “Things” in the Internet of Things (IoT)