As economies worldwide continue to grow, traffic movements are on the rise. Our roads are becoming busier and busier. In urbanized areas, streets and highways are clogged with buses, cars, scooters, and bikes. Inner-cities are dealing with large numbers of delivery vans.

A direct effect of economic growth is an increase in mobility. This affects the flow of our infrastructures. And exactly that increase in mobility hampers economic growth in return. Will new technologies for connected, automated, or even autonomous driving offer a solution? In this post, Vincent Roes, Innovation Manager at DEKRA, offers his insight into that question.

Since the Dutch economy is still growing, that economic loss will most likely be higher next year. Some researchers say that disturbances in infrastructures stagnate economic growth.

Though often implied, traffic jams aren’t only caused by accidents.

Congestion also happens when traffic flow is not optimal. For example, when someone suddenly brakes, switches lanes or merges in a clumsy way.

Or when an accident happens on one side of the road and drivers on the other side get distracted. The smallest hold-up on busy streets or highways already leads to traffic jams, as well as phantom traffic jams, as some people like to call it.

Interestingly, studies have shown that the old ways of batting traffic jams are largely ineffective. We need new strategies for tackling the issue. Though a new lane of fresh asphalt can relieve the pressure on our roads for some time, researchers claim that, in the long run, adding more asphalt results in even more traffic jams.

Some argue that more asphalt and economic upturn creates a presence if more cars and more cargo shipments. 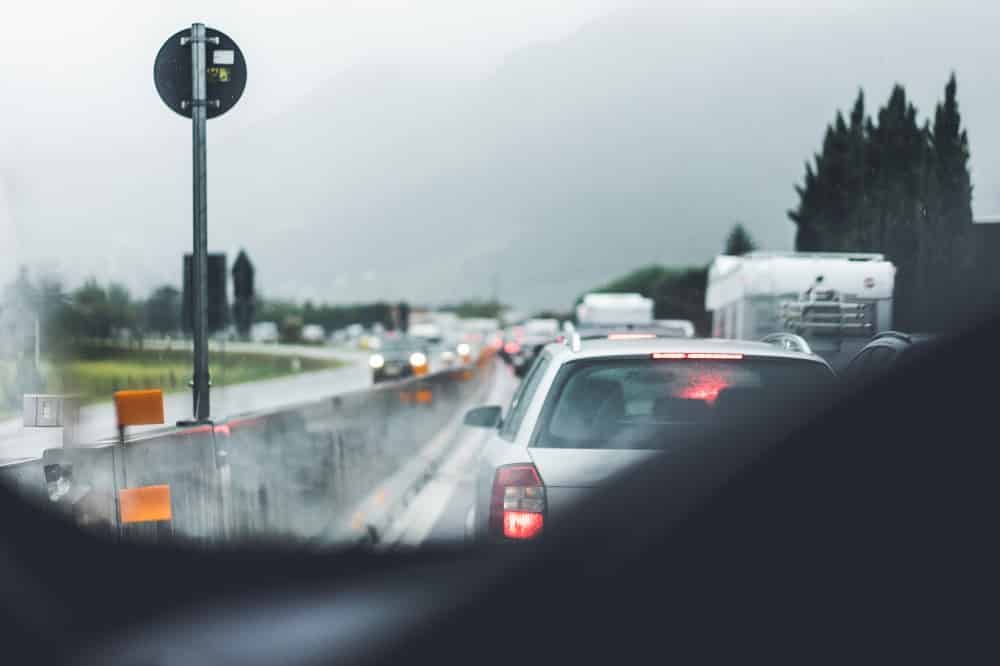 “You can battle traffic the old way, but it isn’t as effective and it has its limitations. We should really look at new technologies to help improve traffic flow.” — Vincent Roes

New mobility concepts are changing the way we look at commuting and car ownership. Trials with connected cars and even vehicles with certain levels of automation are being run in our streets and car sharing is becoming popular, especially in denser, urban areas with Original Equipment Manufacturers (OEMs) testing Mobility as a Service (MaaS) concepts.

In the short term, you can reduce some of the congestion by using adaptive cruise control. That can already improve traffic flow to an extent. But not every car is equipped with that technology, so the effect will be limited. Connected vehicles, however, will make sure traffic anticipates sudden changes in the traffic flow continuously. That’s what “smart traffic” means.

However, that does not solve the fact that there simply is an increase in traffic. “Smart traffic” thus requires not only shiny new tech but also a shift in the way people use roads.

With more cars and trucks on the road, more online shopping, and more cargo an effect is more congestion; often there just isn’t enough space. A solution to dense inner-city traffic are so-called ‘last mile vehicles’: cargo is rearranged from large trucks into smaller and specialized electric vehicles outside of the city center and transported to its destination.

In any case, a legitimate change in how we use our roads, and as a consequence, a decrease in congestion can only happen when we adopt new technologies, such as the ones present in connected and automated vehicles, and new mobility concepts, such as mobility on demand.

Sit Back and Relax

Imagine this: it’s eight o’clock in the morning. You need to get to work. You walk outside and get into a car that you just ordered online through an app. It takes you to your location, merging into a streamlined flow of highway traffic.

Just a little before 08:30, you arrive at your office and the car you just ordered takes off to pick up someone else. Far fetched? Maybe. But this can become a reality and is an example when we look at future mobility concepts.

Though we are still far away from it, manufacturers are working on these kinds of concepts. With Mobility as a Service, there are fewer cars on the road; traffic flow will improve tremendously thanks to emptier roads and advanced technologies.

“We will only adopt mobility on demand, as mentioned in the example above, if we change the way people look at the way they move around and if we create more support for new technologies. The example above is just a part of how new mobility concepts and advanced car technologies advance how we move around. With connected, automated and even autonomous cars, the possibilities are nearly endless.

Only if we keep cars with these new technologies safe and secure, both now and in the future, we have a chance at resolving those issues. Testing and certification of all components and their interoperability, including the environment, are important elements in the development process and verify product quality and performance. Also, standardizing product and protocols allows technologies to be picked up more rapidly.” — Vincent Roes

The willingness to adopt these kinds of technologies will, of course, differ tremendously person to person. If you enjoy driving, you might not like the idea of automating your car. After all, it is often said that cars are emotion. At the same time, you will learn that an automated car can dramatically increase your feeling of well-being in morning traffic, allowing you to sit back and relax or already go through your email

And since you’re still in control, there’s plenty of room for spirited driving left when the stretch of road you are driving on is not boring anymore—for example, when you’re driving home at night on that beautiful road next to the river.

The key to meaningful change is demonstrating the advantages of connected car technologies within a situation no one likes: standing still in traffic. It’s a challenge, but it’s not impossible.

Inside the Home of the Future: Global Connected Home and Building...

Why is AR/VR Synonymous with Gaming?