Unlicensed LTE Explained - LTE-U vs. LAA vs. LWA vs. Multefire 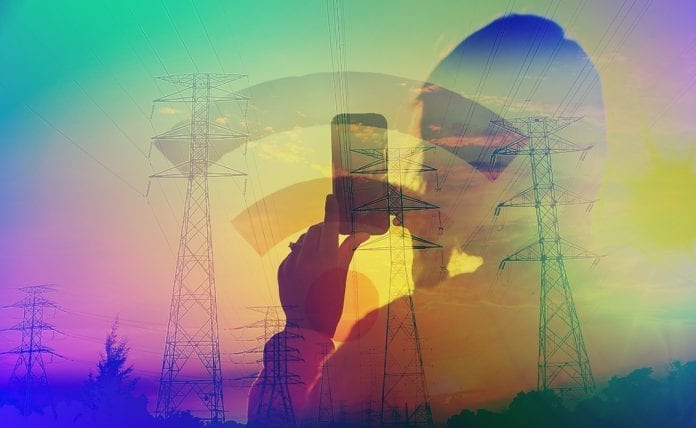 By now, you’ve probably read through Mary Meeker’s 2017 Internet Trends report and confirmed that mobile is still eating the world. Mobile internet usage is growing steadily with average US adults spending 3 hours per day on the internet via mobile devices. As demands for data traffic continues to grow, wireless providers have responded by making adjustments to their LTE technology.

If you own one of the newer phones equipped with Qualcomm’s X16 LTE modem (e.g. Galaxy S7/S7 Edge, LG V20, Pixel), your phone may soon run on a new technology called LTE-U or LTE Unlicensed. With T-Mobile already launching LTE-U service in select areas and Verizon not far behind, it’s time to understand what the hype and the technology is all about.

In Short, LTE-U is Part of the LTE Evolution Track On the Route to 5G.

But it’s a separate evolution track than the one discussed in “Cellular IoT Explained–NB-IoT vs. LTE-M vs. 5G and More.” In this post, we’ll explore the various emerging technologies, implications and benefits, potential problems for coexistence with WiFi, and impact on IoT strategy. 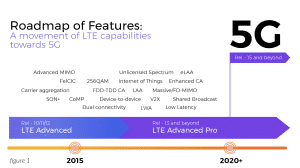 LTE-U, as the name suggests, works by augmenting a carrier’s LTE service by utilizing the unlicensed spectrum in the 5GHz range. One may ask why cellular carriers who already own and enjoy the benefits of licensed spectrum would be interested in unlicensed bands crowded by WiFi networks.

After all, unlicensed spectrum imposes transmission power limitations, and protocols such as Clear Channel Assessment (CCA) and Listen-Before-Talk (LBT) transmission rules apply if the channel is occupied.

Unlicensed spectrum, however, significantly increases network capacity and coverage, especially in crowded public indoor or outdoor areas such as stadiums and malls. Cellular carriers will continue to use LTE in the licensed bands they own for their anchor service but would augment that service with unlicensed 5GHz spectrum via small cells.

While initial deployments are focusing on supplemental downlink mode only, full two-way operation is in the roadmap as part of carrier aggregation. 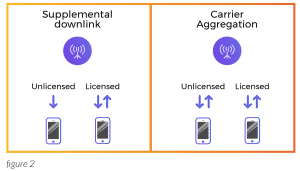 Proponents of LTE-U argue that the use of LTE in unlicensed bands produces better spectrum efficiency than WiFi, leading to higher data rates and capacity. With carrier aggregation, end users should experience better performance as service quality is ensured if unlicensed band becomes unstable due to interference.

For the network operators, use of both spectrums can simplify network management as LTE would be the underlying technology for both deployments, instead of relying on alternative radio technology in the unlicensed band.

Early studies from Nokia and Bell Labs in Ireland show inconclusive capacity benefits from LTE-U. Nokia reported that WiFi has a 60% relative capacity to LTE-U within a single 20 MHz band on unlicensed spectrum without interference from existing networks.

However, results from Bell Labs suggest that LTE network throughput also falls as more user equipment is added due to the overhead associated with scheduling transmissions: 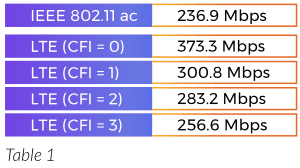 It’s therefore hard to substantiate “significant” advantage in capacity in favor of LTE-U compared to WiFi.

LAA (Licensed Assisted Access) is a standardized version of LTE-U as governed by 3GPP. In certain markets such as the United States, South Korea, and India, a protocol called Listen-Before-Talk (LBT) that was designed to ensure fair coexistence is not enforced as a regulatory requirement.

Given the non-exclusivity of unlicensed bands, one can expect several coexistence issues especially given the popularity of WiFi. While this doesn’t mean that LTE-U neglects coexistence issues (they use dynamic channel selection and adaptive duty cycle/CSAT to mitigate collisions), LAA requires LBT to comply with global coexistence standards that apply equally to WiFi.

LBT requires LTE base stations to “listen” (determine channel availability via energy detection) before “talking” or transmitting data. Various LBT approaches exist, but the one recommended by 3GPP is called LBT-Load Based Equipment Category 4. This adds a similar random access protocol that WiFi devices currently use to ensure not only LTE/WiFi coexistence but a standardized way to ensure LTE/LTE coexistence.

However, one disadvantage to this method is that LTE base stations must send a reservation signal to prevent WiFi signals from initiating transmission until the next frame boundary event. LTE devices cannot start transmission unless this requirement is satisfied even if the channel is free. This control overhead can degrade overall network throughput for all technologies.

*** eLAA stands for enhancements to LAA, which adds uplink aggregation and complexity reduction.

Unlike LTE-U and LAA where hardware changes are necessary for unlicensed LTE transmission to coexist with WiFi signals, LWA configures the network to utilize both networks simultaneously; hence the name LWA, which stands for LTE-WLAN Aggregation.

This technology follows the evolution track of similar methods utilizing both LTE and WiFi such as S2b and LWIP. The key difference is that LWA can split a single data flow, accounting for both channel conditions, to use both LTE and WiFi channels for all applications.

For the user, the benefit of LWA is increased performance and quality of service. The LTE signal is not competing with WiFi but rather using WLAN connections seamlessly to increase capacity.

For the network operator, LWA not only increases system capacity, but also reduces network deployment costs (compared to LTE-U and LAA), while also simplifying WLAN operation with its cellular offerings. 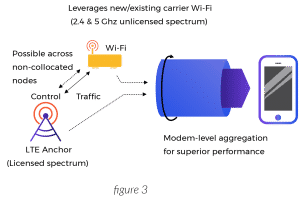 MulteFire technology differs from LTE-U/LAA and LWA in that it operates entirely in the unlicensed band. It was started by Qualcomm and Nokia and is now being spearheaded by a multi-company MulteFire Alliance that includes Intel and Ericsson.

It aims to merge the performance of LTE with the deployment ease of WiFi. In practice, end users install MulteFire access points in lieu of WiFi gateways to provide LTE coverage. The underlying protocol is similar to LAA in that it also conforms to the LBT protocol.

The biggest beneficiaries of MulteFire are the Internet Service Providers and cable companies. MulteFire now allows for easier WiFi-like deployment models without relying on licensed spectrum as the anchoring service.

Given an existing customer base, MulteFire can be an added offering to increase performance. Intel, Nokia, and Qualcomm also see big plays in the industrial market where companies would set up a private MulteFire network for IoT devices.

Even if you’re not a cellular carrier, added capacity from the use of unlicensed bands, is an attractive option for IoT deployments and is an important component in the evolution of 5G.

With the Samsung Galaxy S8 already compatible with LTE-U and LAA out of the box, more cellular carriers will probably follow T-Mobile and Verizon in supporting these new technologies. GE, Nokia, and Qualcomm are actively researching and running trial networks for MulteFire Industrial IoT (IIoT) use cases, so expect the competition for hybrid approaches to increase in the future.

How IoT Can Make Your Home and City Smarter

Using an MQTT Broker? Here’s Why You Need to Think About... 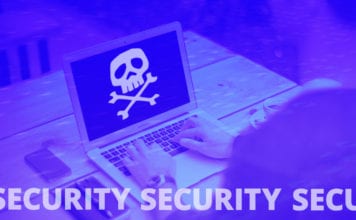 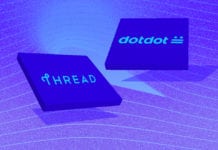 The Arrival of Smart City Living

Coming Soon to a Hotel Near You: AI for Building Maintenance