The Jobs AI Will Take Over First (By Sector) 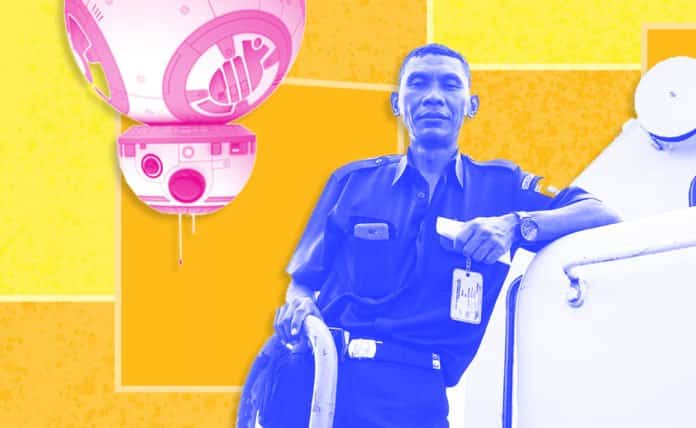 Ever since Steven Spielberg’s 2001 classic, A.I. Artificial Intelligence, people have been concerned about the impact of the rise of machine intelligence. It seems to be a common theme in sci-fi movies (such as I, Robot) that one day, the machines are going to take over, but how true could that be? Will AI robots be taking over our jobs any time soon?

[bctt tweet=”What impact will the rise of #MachineLearning have on jobs? Some argue that as AI takes over many hands-on roles, it will help boost industries. Perhaps the rise of #AI won’t be such a bad thing for the human job market after all. || #IoTForAll #IoT ” username=”iotforall”]

It is thought that transportation and storage will be the hardest hit by AI by 2030, with an estimated 56 percent of jobs at risk between now and then. With self-driving technology getting better by the day, there’s a concern that many driving jobs could soon be made redundant. By 2020, it’s thought that there will be 10 million self-driving vehicles on the road, which has sparked concerns from taxi drivers, truck drivers, and delivery drivers. However, social experts have argued that job skills can be shifted and/or evolved into other sectors.

It’s no surprise to see this one on the list, as the Industrial Revolution was the beginning of the automation of manufacturing. However, it is believed that around 46 percent of jobs will be at risk in this industry by 2030. While AI is hailed as building a better manufacturing process, factory workers are concerned they may still be out of a job. Experts argue there will always be roles for those who want to hone their skills in manufacturing robotics and in working in the AI industry itself.

Self-service checkouts are the beginning, but where does this leave the retail trade in 2030? Statistics show that 44 percent of wholesale and retail jobs will be taken over by robots by then, but what does this mean for the workers? Luckily, not all experts think this will be the case, as many customers have shown they prefer face-to-face interaction in stores. Not all checkout operators will be replaced by robots, but there will be a significant shift in the future.

If automated telephone lines are the bane of your life, it’s only going to get worse, according to the statistics, with 37 percent of administrative and support service jobs at risk. Those who have used an AI chatbot as part of customer services will know it’s not quite perfect just yet. Artificial intelligence also can’t replicate empathy, so humans will still be needed to help deal with complex problems or with upset customers.

While real estate agents will still be needed to show people around properties, to draft contracts, and actually to talk to people, much of everything else in the industry will be done by AI from now on. In fact, 28 percent of jobs will be at risk in this industry by 2030. Many experts argue that the tasks taken by artificial intelligence will actually help boost the real estate industry, so this might not be too bad after all.

The construction industry is a very hands-on profession; there’s no denying that. Yet, it’s thought that nearly a quarter of all jobs (24 percent) may be taken by robots by 2030. According to reports, much of this will be in the planning and administrative areas, just like in real estate. Could this make the construction industry more productive? Only time will tell.

One day, an AI robot could be writing this article, your local newspaper article or even the latest blockbuster hit. A shocking 22 percent of jobs are at risk in the arts and entertainment industry, but what does this really mean? After all, AI writers are known for coming out with some weird and wonderful pieces that don’t quite replicate human writers yet. In fact, many experts believe that more people will have time for creative jobs when AI takes over many of the other hands-on roles. Maybe it won’t be as bad as predicted?

At the bottom of the pile is education, with a tiny 9 percent of job roles at risk to robots. While many students are using computers and the internet to their advantage nowadays, there’s nothing predicted to be able to take over the role of a human teacher, unless someone builds a robot that can handle 30 unruly six-year-olds.

This is just a selection of the jobs that are believed to be taken over by AI by 2030. Do you think the predictions sound about right? Let us know your thoughts in the comments.

Written by Clay Morrison, a freelance graphic artist, neophyte blogger, and a gaming junkie. He loves tech topics related to AI, VR, and Hyperloop. Follow him on Twitter: @ClayMediaProd.

The infographic on which this post is based was originally published here.